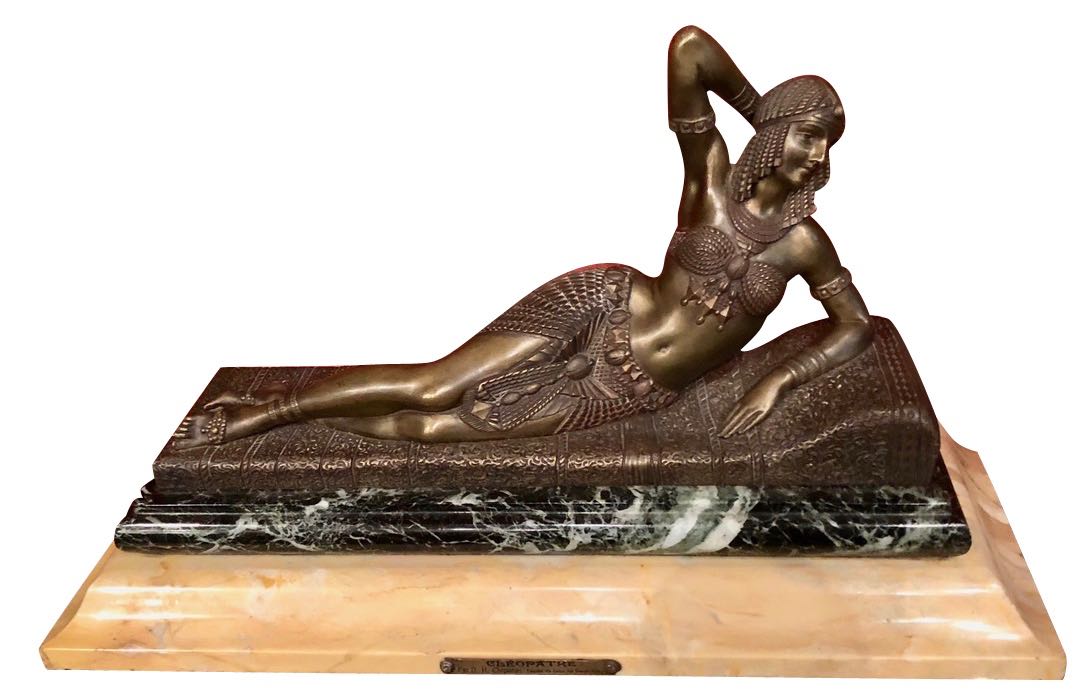 Art Deco Bronze ‘ Cleopatra ‘ by Demetre Chiparus circa 1925 is an  extremely important and rare quality statue by the artist who was arguably the master of Art Deco  figurative sculpture.  Chiparus’s work is in many museums and major collections .Referenced in almost all books on Art Deco statues and Art Deco furnishings, this is certainly the finest signed piece we have ever offered of this important artist’s work.  Amazing details in both dimension and color: the skirt with dimensional scales,  scarabs around the belt, necklaces, detailing on the sandals, feet, and headdress, in both bronze and brass colors. Amazing foundry work and the quality of the metalwork execution.

Cleopatra is shown sitting in the reclined position with additional detailing on the pillow and bed. This outstanding piece is double mounted on marble, with beveled sculpted edges, signed D H Chiparus in the bronze but also marked on the plate: CLEOPATRE par D.H. Chiaparus Laureate du Salon des Beaux-Arts.


Demétre Haralamb Chiparus (16 September 1886 – 22 January 1947) was a Romanian Art Deco era sculptor who lived and worked in Paris, France. He was one of the most important sculptors of the Art Deco era.

“Sculptures of Demetre Chiparus represent the classical manifestation of Art Deco style in decorative bronze ivory sculpture. Traditionally, four factors of influence over the creative activity of the artist can be distinguished: Serge Diaghilev‘s Ballets Russes, ancient Egyptian art, and French theatre. Early motion pictures were among his more notable subjects and were typified by figures with a long, slender, stylized appearance. Some of his sculptures were directly inspired by Russian dancers. For example, faces of “Persian Dance” figures reveal the likenesses of Vaslav Nijinsky and Ida Rubinstein, and the dress in “Starfish Girl” exactly reproduces the sketch for Goldfish’s dress from the ballet “Underwater kingdom” by Lev Annensky. Chiparus could have been influenced by Russian ballets indirectly, through the performances of French music halls and cabarets which bore traces of the strong impact of Russian ballet. Quite often, Chiparus used the photos of Russian and French dancers, stars and models from fashion magazines of his time.”

“After the tomb of Tutankhamun was discovered in 1922, the art of ancient Egypt and the East came to French fashion and is also reflected in the creative activity of Chiparus. Several sculptures by Dimitri Chiparus and Claire Colinet represent queen Cleopatra and Egyptian dancers. The sculptures of Chiparus reflect his time and 1920-1930s sentiment of “folle”. Coming from the oldest French tradition of high-quality and extra-artistic decorative arts, the sculptures of Dimitri Chiparus combine elegance and luxury, embodying the spirit of the Art Deco epoch.”

Collector interest in the work of Chiparus appeared in the 1970s and has flourished since the 1990s. A major collection of Chiparus’ work is on display in the permanent collection of Casa Lis, the art nouveau and art deco museum in Salamanca, Espana.