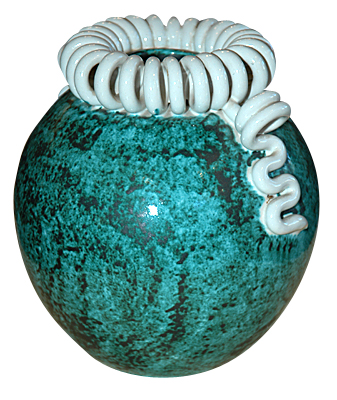 This vase with clay loops is from Faience de Sainte Radegonde, France ( historically important for sculpture and pottery in the late 19th and early 20th century.).The atelier gained acclaim during the Paris Exposition of 1925. This is an example of their later work as their creations moved from classic sculpture into mid century decorative objects (many of which were done for the Primavera collection). This is one of a series that incorporates playful loops of white adorning their trademark aqua-green earthenware.