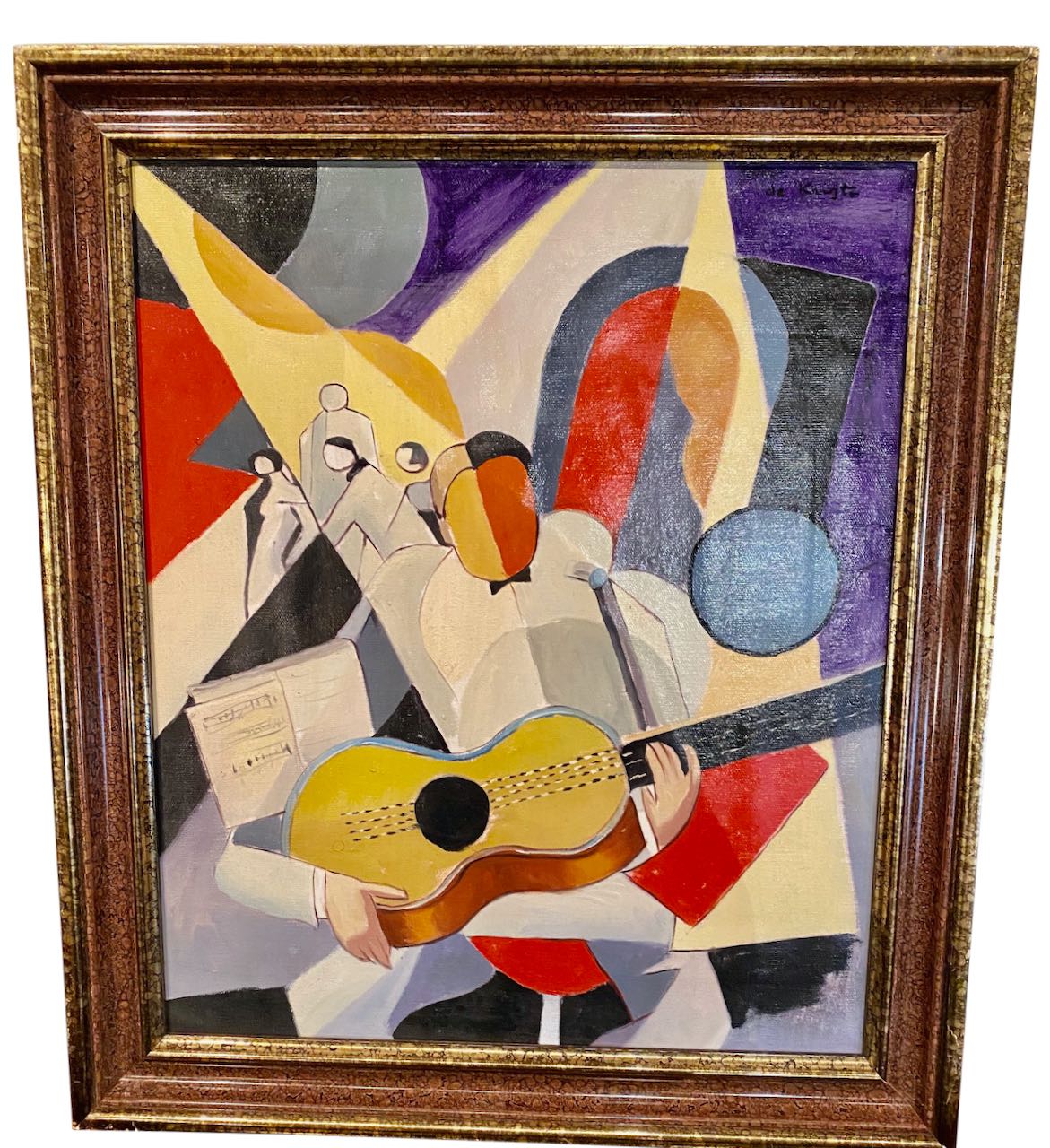 Art Deco cubist painting of guitar player by Bela De Kristo. Strong Cubist style and colors, original and of the period. The image representing a solo guitarist with dancers in the background and sheet music adds to the overall feeling and artist execution.

Bela de Kristo was born in Hungry  1920-2006.
He studied at the Theresianum Vienna University. In 1939 he began his further studies at The Budapest School of Art. During his time as a student, Bela de Kristo was involved in many other enterprises: he designed stage settings for films and took an active role in the first cinema club in Hungry. The Newspaper of Budapest was also publishing his cartoons at the time. After graduating, Bela De Kristo moved to Paris where he organized an exhibition of Hungarian artists in 1947. Whilst he was in Paris, his home country was occupied by the Soviet army, and consequently, he decided to settle indefinitely in Paris. Whilst in Paris, Bela de Kristo regularly frequented the Academy Julian and La Grande Chaumiere. In 1948 he took part in a public exhibition at the Duncan Gallery and later in 1950 he exhibited in The Canes Exhibition at the Carlton Gallery. Four years later, in 1954 he set up a vast workshop on la Rue Vignon. His workshop became a creative hub, where one could find professionals from the press, publishing, and the art world. At the time, many of de Kristo’s drawings and cartoons appeared in Paris Match, but the majority of his time was spent focusing on painting.

Bela de Kristo’s work is hugely varied. Over the years he constantly renewed his mode of expression, making models, photomontages, illustrated children’s’ books, cartoons, and theatre stage sets. Using a rigorous cubist format, de Kristo’s work displays an additional sensitivity and a softened vision of the world. In his early period, he was greatly influenced by the Russian Constructivists such as Malevich as well as Picasso’s synthetic cubist works. This combination of influences is in evidence in ‘Suprematist Composition,’ (1948). There is ever-present humor in his work, sometimes naïve in its display. De Kristo invited the viewer to consider surface beauty along with the subjective depth. He was a lover of color. Harmonizing shades and tones, he broke the lines and curves of objects and light into the multiple perspectives of cubism.

Drawing from the subjects that surrounded him Bela de Kristo was inspired by the happenings of everyday life. He tried to use abstraction in a similar way to the Surrealists but it was in his cubism that he excelled. After withdrawing from the Parisian world, Bela de Kristo moved to Normandy, where he died in 2006.