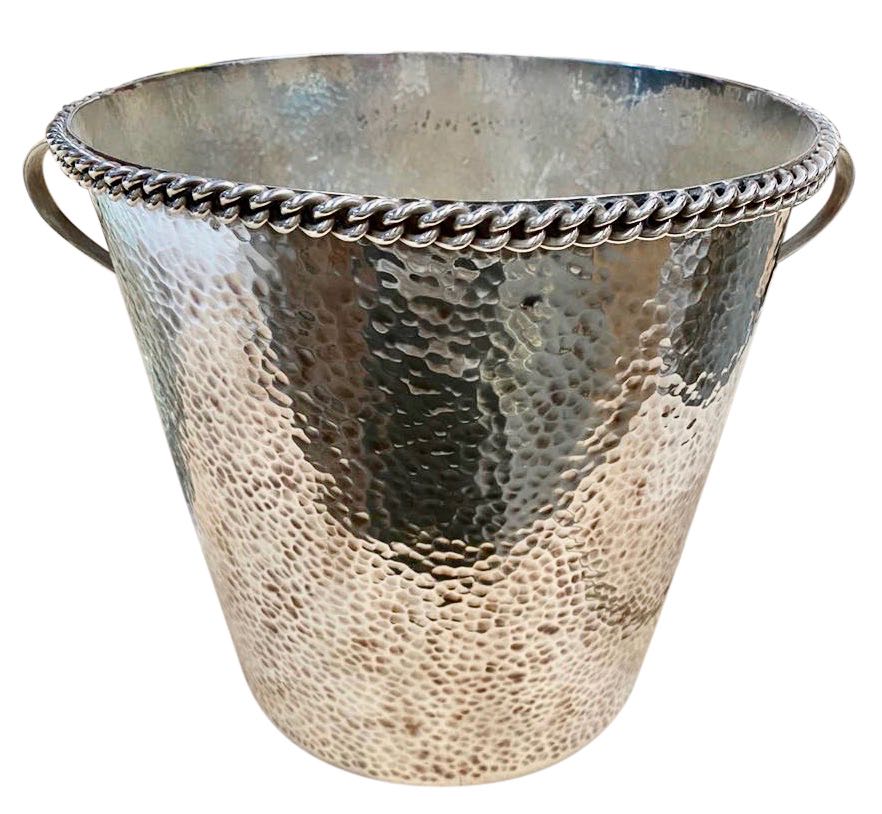 Jean Després was a French jewelry maker and designer best known for his intricate Art Deco jewelry made from semi-precious stones, machine parts, and enamel.  This matching silver plate champagne and ice bucket set offered here are in pristine condition. A perfect example depicting his gormette chain treatment, hammered textured finish. Both pieces stamped with the designer’s mark (his initials J & D) made circa 1940-1950s.

We also have at this time the matching cocktail shaker.
That is being offered here.

Born in Souvigny, France, his father owned a jewelry shop and sent his son to apprentice with a goldsmith and jeweler when he was 16. Jean Després developed his own designs working in art silver, jewelry, and doing very sophisticated high-end objects of metal art. Many pieces developed with his signature the addition of a heavy link chain called “gormette”. This adorned many of his pieces and played very well against both polished and hammered surfaces, and these pieces were in great demand, and remain so today.

His jewelry perfectly expressed the new esthetic of the time.  He participated in a number of exhibitions, and his jewelry was very well received. His revolutionary jewelry designs were of three types – “bijoux glaces”, “bijoux moteurs”, and “bijoux ceramique”. 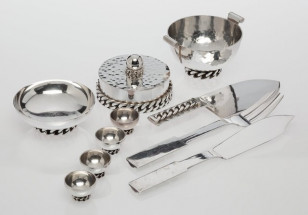 Desprès enjoyed using unusual materials in his jewelry. In 1937, he designed a series of pendants, necklaces, bracelets, and pins that incorporated ceramic medallions in the neo-classical style executed by the ceramicist Jean Mayodon. He was nicknamed “the Picasso of jewelry work”, and exhibited in all the important national and international exhibitions, and won numerous prizes. His work was appreciated by, (and purchased by) many important writers and artists- Anatole France, Paul Signac, Francois Pompon, the influential critic and curator Andre Malraux, and more recently, Andy Warhol, who was an enthusiastic collector of his jewelry and boxes. Moving on through the 1940s, ’50s and into the 1970s, his work became somewhat less complex, relying more on a hammered surface with perhaps a simple motif, and he also produced some interesting pieces in 18k gold, but most of the later pieces do not have the originality and power of his earlier designs. 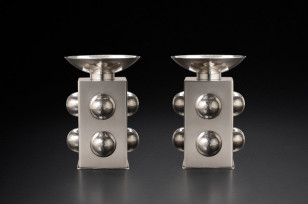 Despres was also a very prolific designer of useful objects, including all manner of pieces for the table, including vases, tea and coffee services, flatware, trays, candelabra, pitchers, serving pieces, and much more. The earlier of these pieces are quite severely geometric, and show great restraint in their design, often relying on only a hammered surface for textural interest. Moving into the 1940s, he introduced a design feature that was perhaps a bit more commercial but gave his pieces great chic.