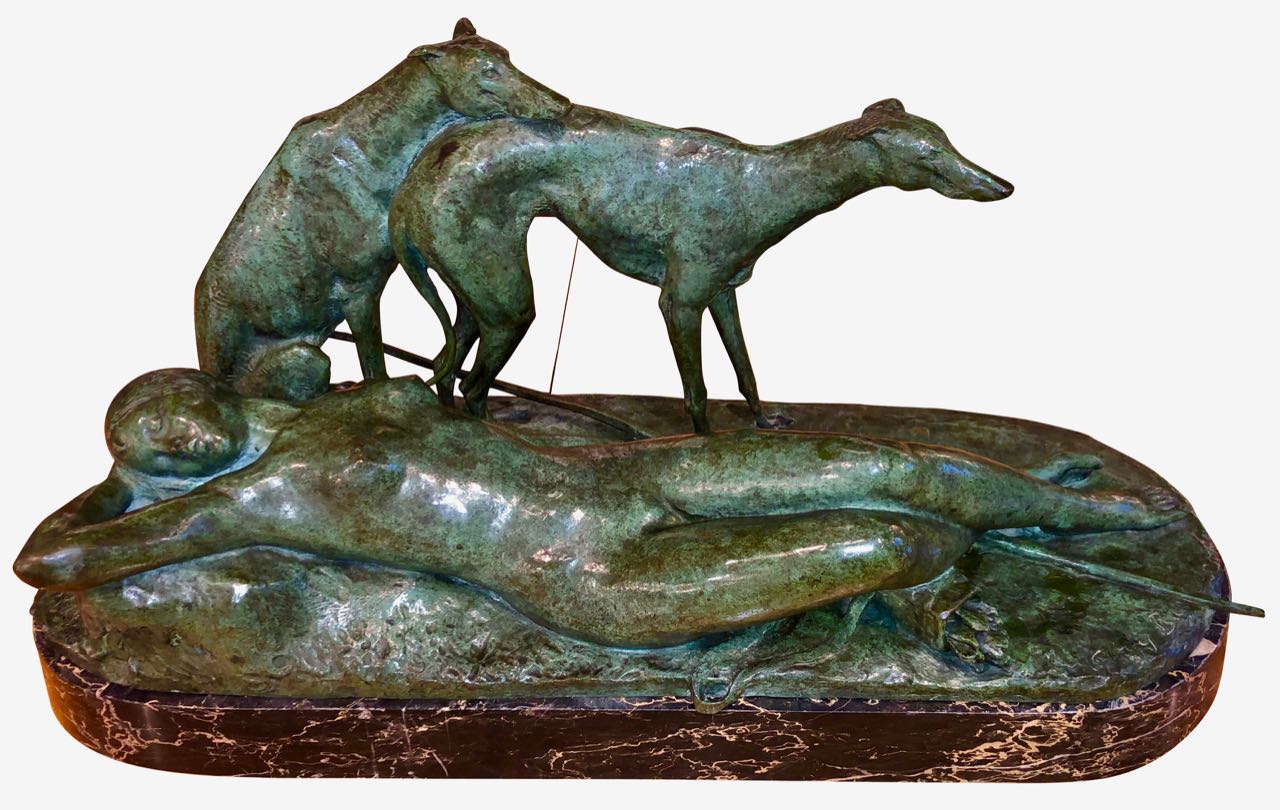 Ary Bitter was an important French Artist who specialized in animal sculptures and the female form. He created many significant works during the Art Deco period. This unique piece, extremely rare, is stunning, artistic and rendered in the highest quality. The sculpture depicts Diana the Huntress resting in the forest surrounded by her two faithful greyhound hunting dogs. Her bow and arrows are lying by her side. A quality  bronze with a  verdigris green patina bears the artists signature. The statue is sitting on a most outstanding original Portoro marble base. The shape of the base is  contoured precisely to fit the unusual rounded shape of the bronze. Also stamped in the bronze Susse Frères Paris an outstanding foundry.
This Art Deco piece represents the artist’s vision of the mythic image of Diana. It is of  the highest quality in every way. You can read in the bio below about his extensive work and the way he was displayed in permanent public spaces and expositions. 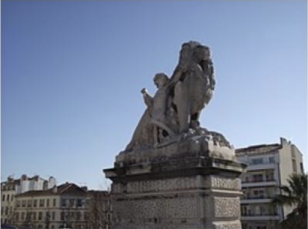 Ary Bitter (1883–1973) was a French artist, best known for his animal sculptures. He was a designer, painter, and sculptor in various mediums including plaster. In 1910, his work “l’Enfant au chevreau” received an “honorable mention” and he carried off the school’s “Chenavard” prize. The following year, in 1911, he won the “Lemaire” prize. and a year later, in 1912, he exhibited at the Salon des Artistes Français and was a regular exhibitor there up until 1939. He won a bronze medal at the 1913 Salon and the silver medal at the 1921 Salon. In 1913, he worked on a public fountain in Nantes. In 1921, he was commissioned to work on the Sanary-sur-Merwar memorial as well as those in the Marseille cemeteries of St Louis and St Jérôme. In 1923, he created a “mascot” for Mme Louis Renault’s car and 1924 saw him win the gold at that years Paris Salon The next year he was one of the sculptors featured by the founder Susse Frères in an exhibition at the Boulevard de la Madeleine showroom.

He was in fact commissioned by Susse Frères to work with them on several limited editions.1926 saw his work as part of the decoration of Marseille’s St Charles station and the work “Bonne Mère” for the Cathedral. In 1927,he exhibited the work “Chloé allongée” at the Salon and 1931 saw him exhibit a bronze version of “Diane Chasseresse” and in 1932 he was made a “Chevalier de la Légion d’Honneur” and his “Cajolerie” was declared “hors concours” at that year’s Salon. In 1935 he showed two works at the Salon, “Léda” and “Le Cygne”.

Further honors followed when in 1937 he was awarded a gold medal at the Exposition Internationale des Arts et des Techniques de Paris and he was invited to show work at the “Palais de la Céramique” and the “Palais du Métal”. He was also given a “diplôme d’honneur” by the École nationale supérieure des Beaux-Arts.In 1938, he created ten works in terra-cotta for the Musée Hector-Berliozand in 1940, 3 griffons for a fountain in Pithiviers. In 1949, he worked on the Cambo-les-Bainsmonument to Edmond Rostand.