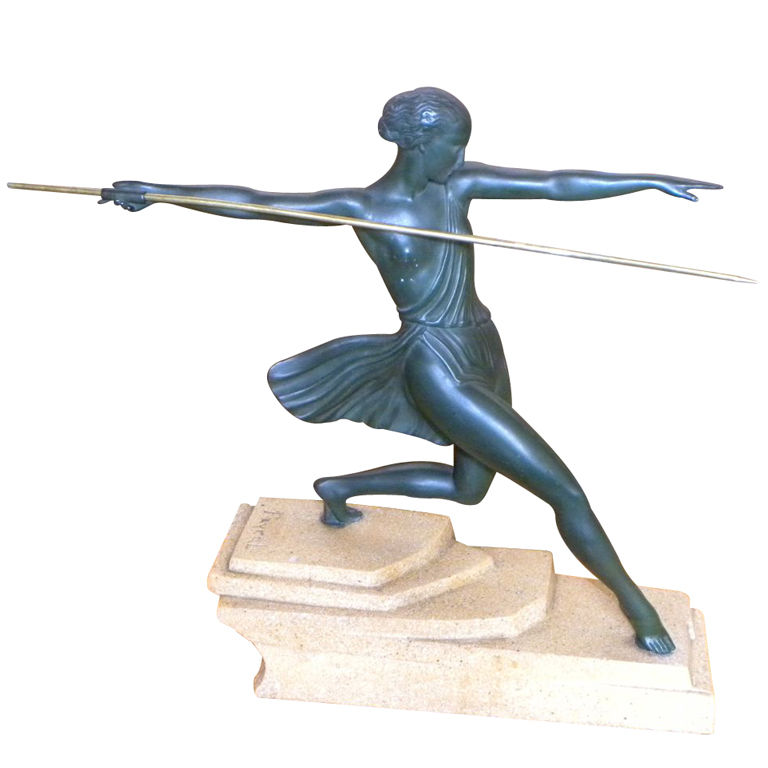 Presented here is an original and the epitome of great Art Deco design. Showing all the signs of a classic, both in style, quality and presence. This is Diana the Huntress, a theme often repeated in Art Deco folklore. What makes this piece so great: It has the style, the size and all the elements. First, the quality is great, brass metal with special green patina, very heavy and all well made. Secondly, the movement of the pieces shows the elegance of what we understand as style, substance equalling Art Deco. Diana is in a wonderful pose, with both legs secure, fluid javelin and ready to attack. The movement is reinforced by the angled stepped concrete cast base. Javelin is solid brass. circa 1930′s.

Pierre Le Faguays ( using his pseudonym  Fayral ), was a prolific and versatile avant-garde French sculptor whose works greatly influenced the styles of the 1920′s and early 1930′s. His dancing girls are delicate creatures and have lovely, sensitive faces (in bronze and tinted ivory) equal to those of the better known specialists-Chiparus, Preiss, Icart and Lorenzl. Fayral ( Le Faguays) was born in Nantes , France and became famous for the originality he gave his dancers, many of which were inspired by the statues of Tanagra. He gained a medal of honor for his work in 1927. He was a best friend of Max Le Verrier and the Le Verrier foundry made most of – if not all of his pieces. Le Faguays captured the beauty and elegance of the female form with great talent and this is a wonderful example.