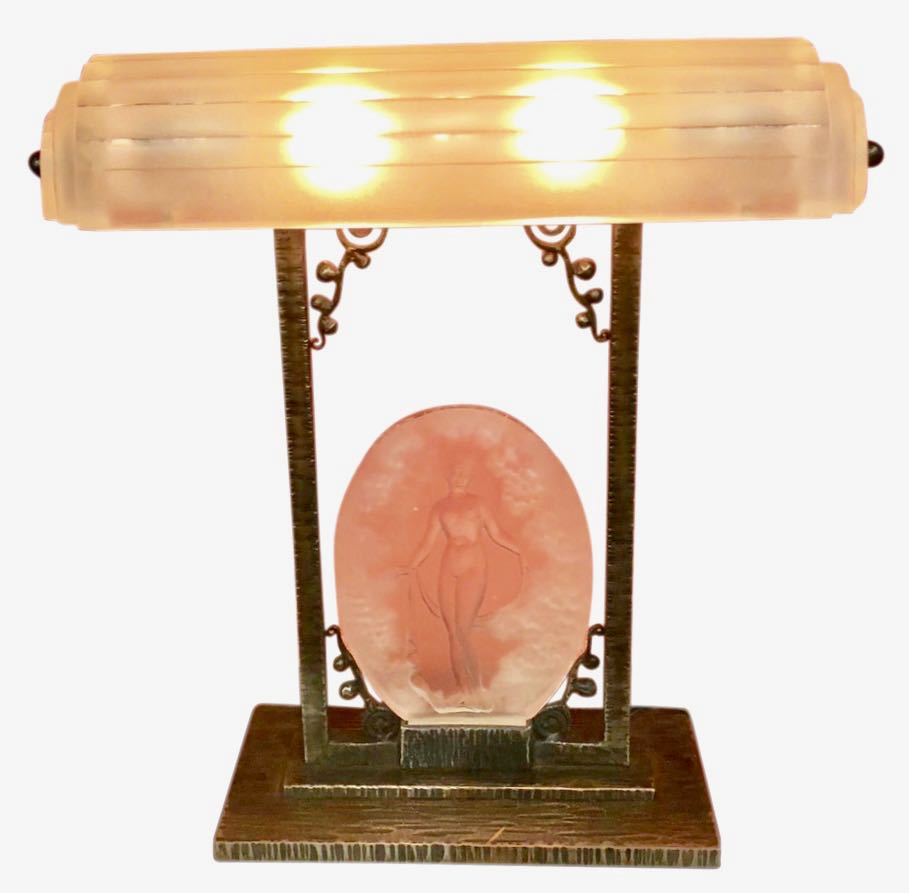 An unusual French Art Deco table lamp created by Pierre D’Avesn circa 1930.  Unique combination of French iron “fer forge” with a combination of a horizontally banded frosted shade and a glass acid etched medallion depicting the female form surrounded by a sweet floral outline.  This was cast and signed by the artist in the lower part of glass medallion and was  an “important” piece by a true master  glassmaker. The upper glass shade sheds light on the artistic medallion, both elements work in concert to make this functional, artistic and pleasing to the eye. It would  be perfect on a desk, vanity or buffet.

In our retail store we were constantly asked if we had “any Lalique”. It seems that is one name so often sought by novices and sophisticated collectors alike. So it is interesting to note that Pierre D’Avesn (born Pierre Gire) went to work for Rene Lalique as an apprentice at the age of 14 and stayed with him for eleven years until just after the Paris Exposition of 1925. It is highly likely that many pieces we see today attributed to Lalique may have been made by a young D’Avesn who not only learned amazing moulded glass technique but also the importance of having an ability to sign a piece with one’s own name! Lalique required all employees to only sign the name “Lalique ” so it may have been a great opportunity for D’Avesn to join the Daum company after 1925 to run the “Verrier d’Art Lorrain” division in which he had an agreement to sign his own work! In 1937 he worked for Verlys and later for Sevres where he continued to design pieces until he died in 1984. During his long career he did work for several companies producing large quantities of glass pieces for light fixtures and table ware but those art creations that bear his name are rare, exquisite and worth adding to any collection of glass pieces and Art Deco objet d’art.