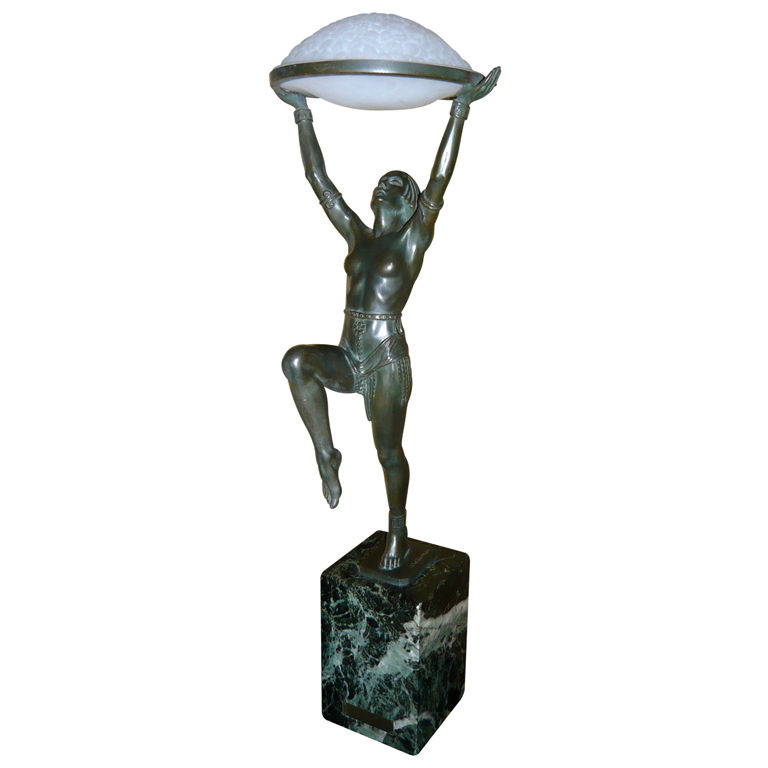 This spectacular Max Le Verrier piece was designed in 1923. It is called ‘Danseuse a La Coupe’. This is a special piece, one I have only once in well over 12 years. It is all original: and in fantastic condition. It is a very beautiful piece, which is styled after a dancer from Follies Bergeres. The woman, rather scantily dressed in simple skirt (that’s all), her hair very stylized, holding a gorgeous domed moulded glass lamp. The style is pure Art Deco, glass looks like typical French molded glass of the period. There are remarkable details on this sculpture and the patina has a beautiful original glazed- bronzed look that is not something you see everyday. Outstanding! The light adds a warm glow both to the woman and the stylized floral motif in the top. The size is quite nice as well and is signed Le Verrier in the base. A remarkable piece with great Art Deco style. A sculpture you can enjoy for years and years to come. I mean she looks pretty good for 88 years old.

About Max Le Verrier: Max le Verrier was born in Neuilly-sur-Seine, near Paris, in 1891. From an early age he showed great promise as an artist and sculptor; and after serving in the French army during World War I, he studied at the Ecole des Beaux-Arts in Geneva. During his studies in Switzerland he met fellow sculptors Pierre le Faguays and Marcel Bouraine, who became close friends and with whom he collaborated for much of his life. Upon completing his studies, le Verrier returned to France in 1919, and founded his own studio in Paris. It was at this time that he created his first popular sculpture – the famous ‘Pelican’ – which was the first of a long line of animal figures that bore his name. Le Verrier was awarded a Gold medal for his sculptures at the 1925 Paris l’Exposition des Arts Décoratifs et Industriels (the famous exhibition from which the term ‘Art Deco’ was derived). In 1926, le Verrier opened his own foundry, casting pieces for a wide range of French sculptors of the period, including Pierre Le Faguays, Marcel Bourain, Janle, Denis, and Charles. From the outset, he gained a reputation for the very high quality work, exceptional detailing and accuracy of the items that his firm produced. Interestingly, the foundry did not cast in bronze as is commonly assumed, because le Verrier felt that he could achieve better detail by using his own proprietary mix of metals. At the same time as running his foundry, le Verrier continued to sculpt his own creations, and in the 1920′s he became famous for his studies of woman as part of the Art Deco era’s fascination with the ideal female form. His female figures are characterised by a lithe athleticism and perfect symmetry; and are highly regarded and much sought after. Le Verrier continued working throughout the 1930′s – receiving a medal of honor at the Paris International Exhibition in 1937 – before being arrested in 1944 for his resistance activities against the Nazi-backed regime. He reopened his studio after World War II, and continued to sculpt until his death in 1973.