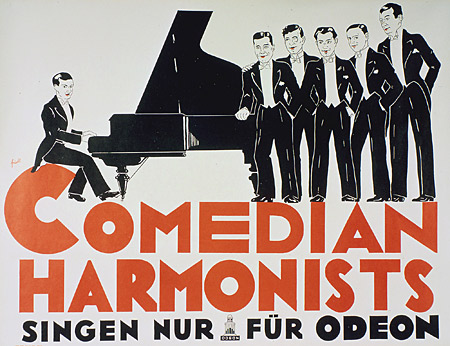 This two color stone lithograph poster of the Comedian Harmonists is in beautiful condition and mounted on linen backing .
A strong black and white with red highlights and details  It is a stylized  illustration of  the popular singing group that had immense success in Germany from 1928-1934 with their original songs, humor and renditions of  American music written by Cole Porter and others of the period. Because three of the six members were Jewish and another had a Jewish wife, the Nazi’s began to censor,threaten and limit their work in the 1930s . To escape repression they traveled to the United States but could not stay. The group was forced to disband and much of their work was forgotten but revived  interest began in the 1960s brought about by film documentaries, re-release of recordings and continued  through the 1997 movie the Harmonists which was  based on their life stories. Today Max Raabe and the Palast Ochester is bringing about renewed of appreciation of their work.  This poster by Friedl was done in 1930 and reprinted from the plates in 1970.