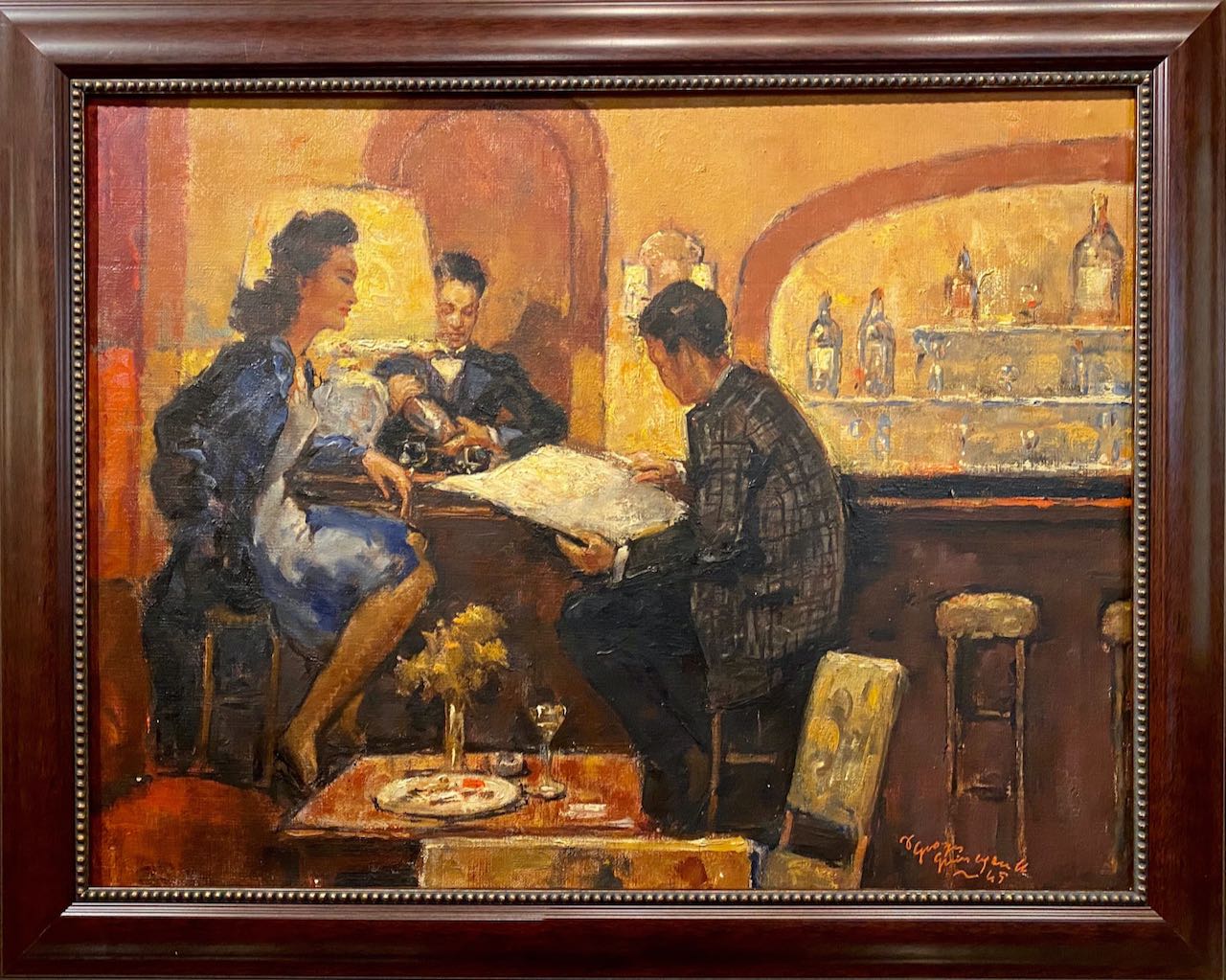 Art Deco Painting by Georges Guinegault “in a Bar” Oil on Canvas 1945. A realistic view of an affluent couple sitting at their favorite bar, reading and relaxing.  The lighting is striking and the details are very painterly. The bartender stands, classically shaking the libations as the sophisticated couple sitting and enjoying this casual moment. The back bar with it own lighting and every other detail. Newly framed, a warm feeling transports you into the moment

In 1913, a student at the School of Fine Arts in Rennes, obtained a prize at the general competition for a decorative composition, “Bacon de Fenêtre”, organized by the State Secretariat for Fine Arts at the National School of Fine arts of Paris. In June 1912, he obtained a mention in this same competition. This painter and engraver is then the pupil of Eugène Delâtre at the School of Fine Arts in Paris. To launch his career, Guinegault lives in Montparnasse where he rents a mansion at 7 rue Jules Chaplain. In 1933, his studio was located rue Dieulafoy in Paris.

He painted landscapes of Paris, the department of Manche, in particular in the Hague, Brittany (Quiberon, Saint-Malo …), the Riviera (Saint-Tropez), the Pyrenees, Beauce, Basque country (1948) as well as orientalist scenes during his stay in Morocco (Marrakech, Meknes). His Moroccan works are today particularly sought after.

Known for  portraits and especially a number of nudes while also practices engraving, at least from 1925 to 1931. The Galerie Lutetia, in New York and rue Notre-Dame-des-Victoires in Paris, publishes three of his etchings: Rue à Ciboure, Ancien cloître à Ciboure and On the Spanish border. In 1930, Hautecoeur published two aquatints : Evening in Saint-Tropez and Tartanes in Saint-Tropez . In 1931, L’Estampe Moderne published an aquatint, Feux de joie en Bretagne.