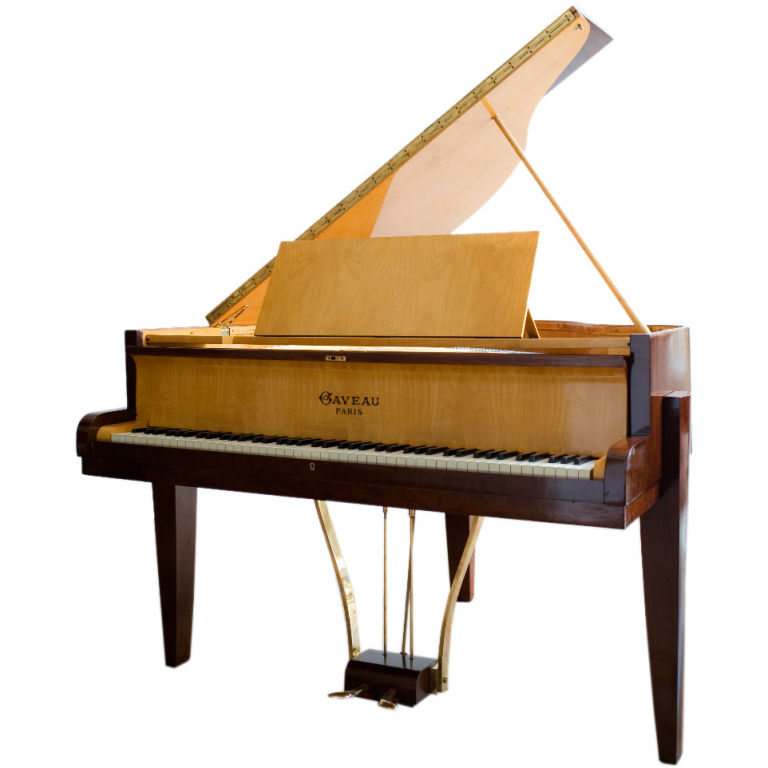 You can see a similar design of this piano pictured in photos from the French luxury liner Normandie. It is documented that Dominique was a major design source for the Le Normandie, designing one of only four private luxury suites. These suites were all fashioned with highest level of current French taste, design and materials. These suites were occupied by some of the most famous and talented stars of the day, Marlene Dietrich, Fred Astaire, Johnny Weissmuller,Cary Grant, James Steward, Thomas Mann, Salvidor Dali and Joseph Kennedy to name a few.

Dominique was founded by Andre Domin (1883 – 1962) and Marcel Genevriere (1885 – 1976). Their furniture design was characterized by simplicity and dignity. One of Dominique’s first commissions was to provide furniture for the home of silver designer Jean Puiforcat in Biarritz. This was followed by a commission to do the establishment of the perfumer Houbigant in Neuilly. Beginning in 1926 they exhibited with Chareau, Legrain, Puiforcat and Raymond Templier as the “Groupe des Cinq”. Dominique exhibited a “Salon d’un Ambassadeur” at the 1925 Paris Exposition International des Arts Deratifs et Industrieles Modernes. They also exhibited at the Exposition Colonial in Paris in 1931 and created a “Salon de Musique” for the 1937 Exposition Internationale des Arts et Techniques also in Paris. Ruhlmann is without rival in the 20th century and 80 years later those pianos demanded over $500.000 .

This particular piano, made by Gaveau possesses a gorgeous, powerful tone. It has been fully restored with a french polish treatment on the cabinet and also includes ivory keys. This fine example sums up Gaveau’s philosophy as a piano- cabinet maker.