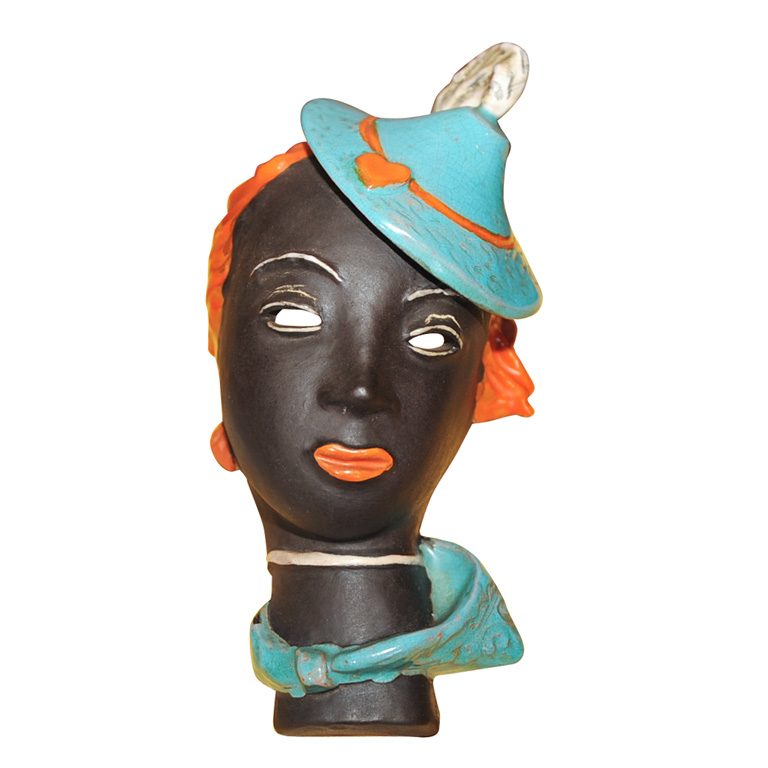 his mask in perfect condition still bears the original foil paper tag that says Goldscheider/Germany on the reverse. Many thousands of different masks were made by the Goldscheider Company between 1895 when Frederick Goldscheider founded the company, and throughout the many years that followed up until WW2. Some pieces were manufactured in Austria, some in Germany, others in Vienna and Czechoslovakia. Highly collectable are the faces glazed in black with bright orange glazed lips and interesting and fanciful details such as the jaunty hat worn in this model. This mask may be attributed to Rudolf Knoerlein who designed for Goldsheidersche Porcelain Works in Vienna, Austria in the mid 1920s-1930s and did produced many of the pieces that featured black faces and colorful curls and lips.

About Goldscheider
In 1885, Friedrich Goldscheider came from the small Bohemian city of Pilsen to Vienna and founded the Goldscheider Manufactory and Majolica Factory. It became one of the most influential ceramic manufactories of terracotta, faience and bronze objects in Austria with subsidiaries in Paris, Leipzig and Florence. For over half a century Goldscheider created masterpieces of historical revivalism, Art Nouveau(Jugendstil) and Art Deco. Famous artists like Josef Lorenzl, Stefan Dakon, Ida Meisinger and the two perhaps best known Austrian ceramic artists Michael Powolny and Vally Wieselthier worked for Goldscheider. More than 9,000 different models were created over a period of three generations. Since the very beginning many of these won first prizes and gold medals at innumerable world fairs, exhibitions and trade fairs. Goldscheider figures are nowadays very much sought after by collectors world-wide and reach astonishing prices at auctions. Goldscheider has made porcelains in three places. The family left Vienna in 1938 and started factories in England and in Trenton, New Jersey. The New Jersey factory started in 1940 as Goldscheider-U.S.A. In 1941 it became Goldscheider-Everlast Corporation. From 1947 to 1953 it was Goldcrest Ceramics Corporation. In 1950 the Vienna plant was returned to Mr. Goldscheider and the company continues in business. The Trenton, New Jersey, business, now called Goldscheider of Vienna, imports all of the pieces.