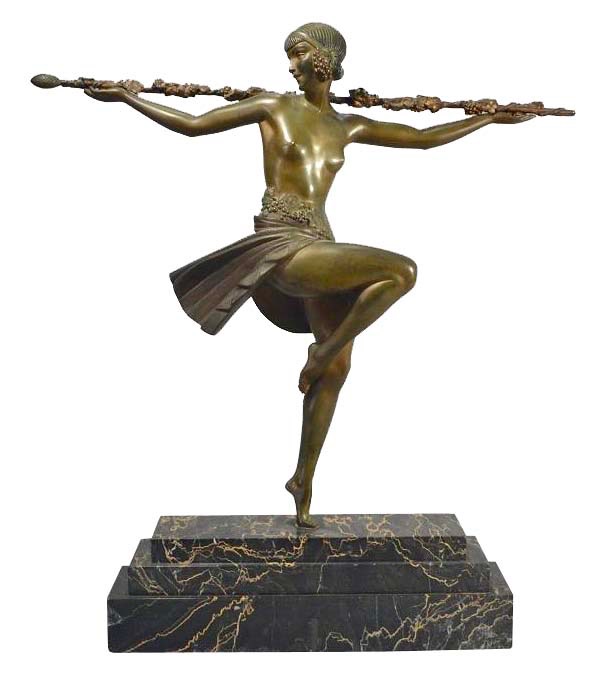 A Grand Art Deco Statue of a Dancer with a Thyrsus by the prolific sculptor Pierre Le Faguays  produced in the Etling Foundry in 1930. At  55cm (22 inches) tall this l is a stunning work in every way. A cold painted bronze on a Portoro Marble base and rendered in exquisite detail.

Drawing from Greek mythology in it’s inspiration, it also embodies all the classic features of the art deco era: a beautiful face framed with fashionable bobbed hair, a nearly nude form with a swish of a skirt to show movement and a ballerina’s pose. We consider this to be in the category of a”signature piece” of one of the key artists of the period, Le Faguays. If you could have “just one” piece this could be a best choice. If you have an important collection, this one should be a part of it!

What is a “thryrsus”? It  is a staff or pole decorated with florals and typically capped with pine cones . It is used in ceremonial pageants, dances and it appears in art and sculpture of Ancient Greece. 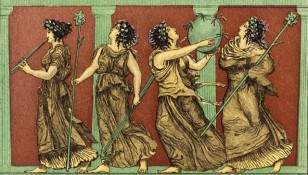 Pierre Le Faguays  was an award winning sculptor who received medals of honor in 1926 and 1927 for his contributions to the salons of the  Societe des Artistes Francais. A good friend and colleague of Max Le Verrier, many of his pieces were produced at the Le Verrier Foundry not only in his own name but in other “nom de plumes” -” Fayral ” for his metalwork pieces, and” Pierre Laurel” for some of his bronzes.  His wife, Raymond Guerbe was also a sculptor and some of her statues have, in the past, been attributed to Le Faguays though they are now recognized to be her works.

Born in Nantes in 1892 his first major exhibition was in 1922. He has earned acclaim for his attention to decorative detail and his “anatomical accuracy” in sculpting the human form . Dancers” were among his favorite subjects.  Le Faguays, Le Verrier and Marcel Bouraine all studied together at the school of Beaux Arts in Geneva and remained life long friends and collaborators.

This piece was produced and signed in the Etling Foundry in Paris which was founded in 1909 by Edmond Laurent Etling with a shop on the Rue de Paradis featuring art objects designed by what would later become the most famed of art deco era  sculptors including  Chiparus, Collinet and Marcel Guillard. ” Dancer with Thyrus ” bears two signatures in the marble – both La Faguays and Etling.