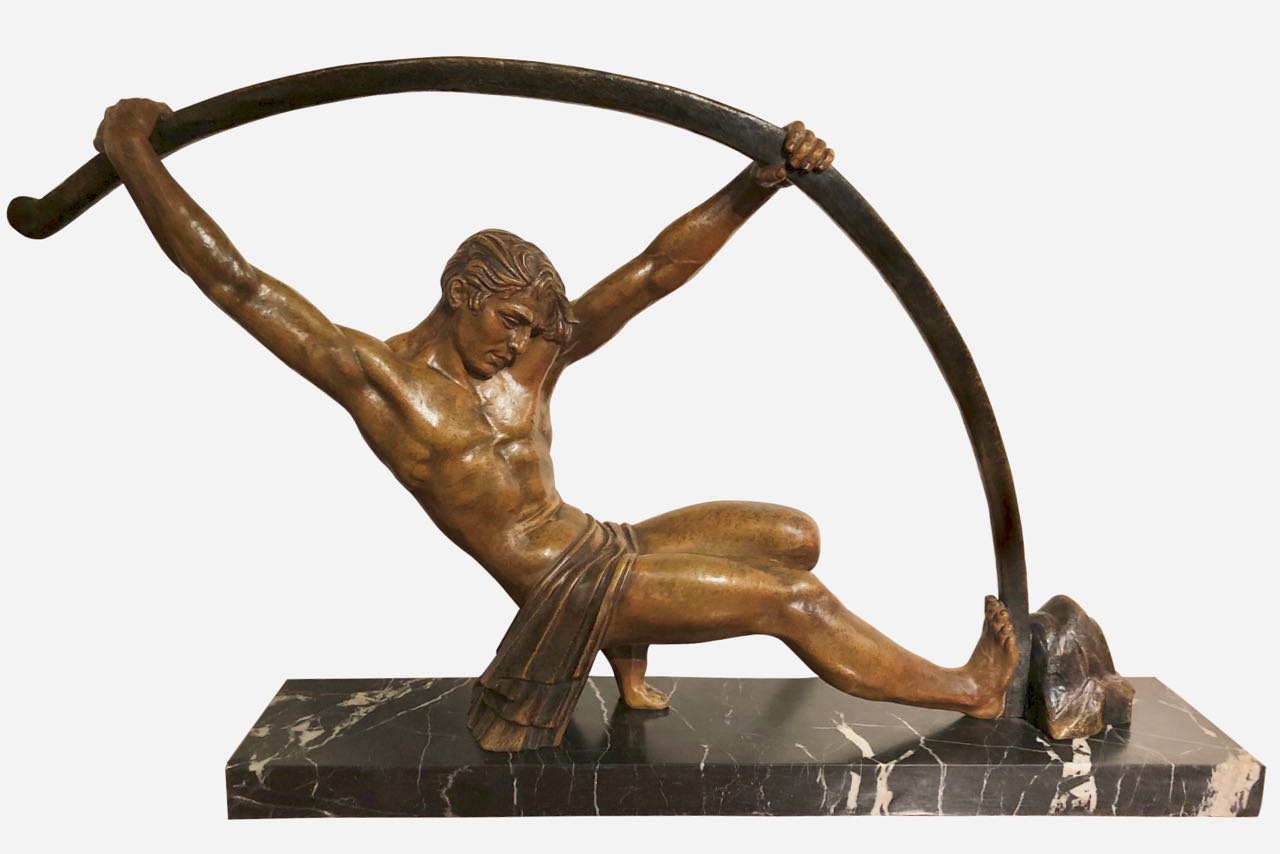 “L’Age du Bronze” sculpture by Demetre Chiparus, a powerful French spelter statue is sometimes referred to as the famous ” bending bar man”  It was made in two sizes and  this one, much more rare, is the larger size of 34 ” X 6.5″ D X 21″ T, the smaller one is about 1/2 the size as the one offered here. The  detail in the sculpture is of the finest quality. The base is made of beautiful black, white marble and signed D.H.Chiparus, there is a small area on the back edge with some hardly noticeable edge chips, in the 13th picture. The condition of this powerful statue  is excellent. The original patina on  is amazing  with  color  that is very intense. This is a  very rare find in this size and Chiparus pieces continue to climb in value as his work is featured at every major auction house throughout the world, such as  Christie’s, Bonham’s and Sotheby’s.

“L’Age du Bronze” as pictured here is one of the few male sculptures he produced and  is featured in the book Chiparus – Master of Art Deco by Alberto Shayo page 65. 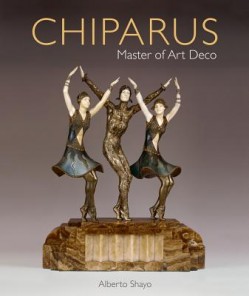 About Chiparus: “The first sculptures of Chiparus were created in the realistic style and were exhibited at the Salon of 1914. He employed the combination of bronze and ivory, called “chryselephantine”, to great effect. Most of his renowned works were made between 1914 and 1933. The first series of sculptures manufactured by Chiparus were the series of the children. The mature style of Chiparus took shape beginning in the 1920s. His sculptures are remarkable for their bright and outstanding decorative effect. Dancers of the Russian Ballet, French theatre, and early motion pictures were among his more notable subjects and were typified by a long, slender, stylized appearance. His work was influenced by an interest in Egypt, after Pharaoh Tutankhamen’s tomb was excavated. He worked primarily with the Edmond Etling et Cie Foundry in Paris administrated by Julien Dreyfus. Les Neveux de J. Lehmann was the second foundry who consistently worked with Chiparus and produced the sculptures of his models. In  1923 he showed his “Javelin Thrower” and in 1928 exhibited his “Ta-Keo” dancer. During the period of Nazi persecution and  World War 2 the foundries discontinued production of work by Chiparus. The economic situation of that time was not favorable to the development of decorative arts and circumstances for many sculptors worsened. After the 1940s almost no works of Chiparus were sold but  he continued sculpting for his own pleasure, depicting animals in the Art Deco style. At the 1942 Paris Salon, the plaster sculptures “Polar Bear” and “American Bison” were exhibited and in 1943 he showed a marble “Polar Bear” and plaster “Pelican”. Collector interest in the work of Chiparus had a resurgence in the 1970s and has flourished since the 1990s as his work is iconic with its dramatic Art Deco Style