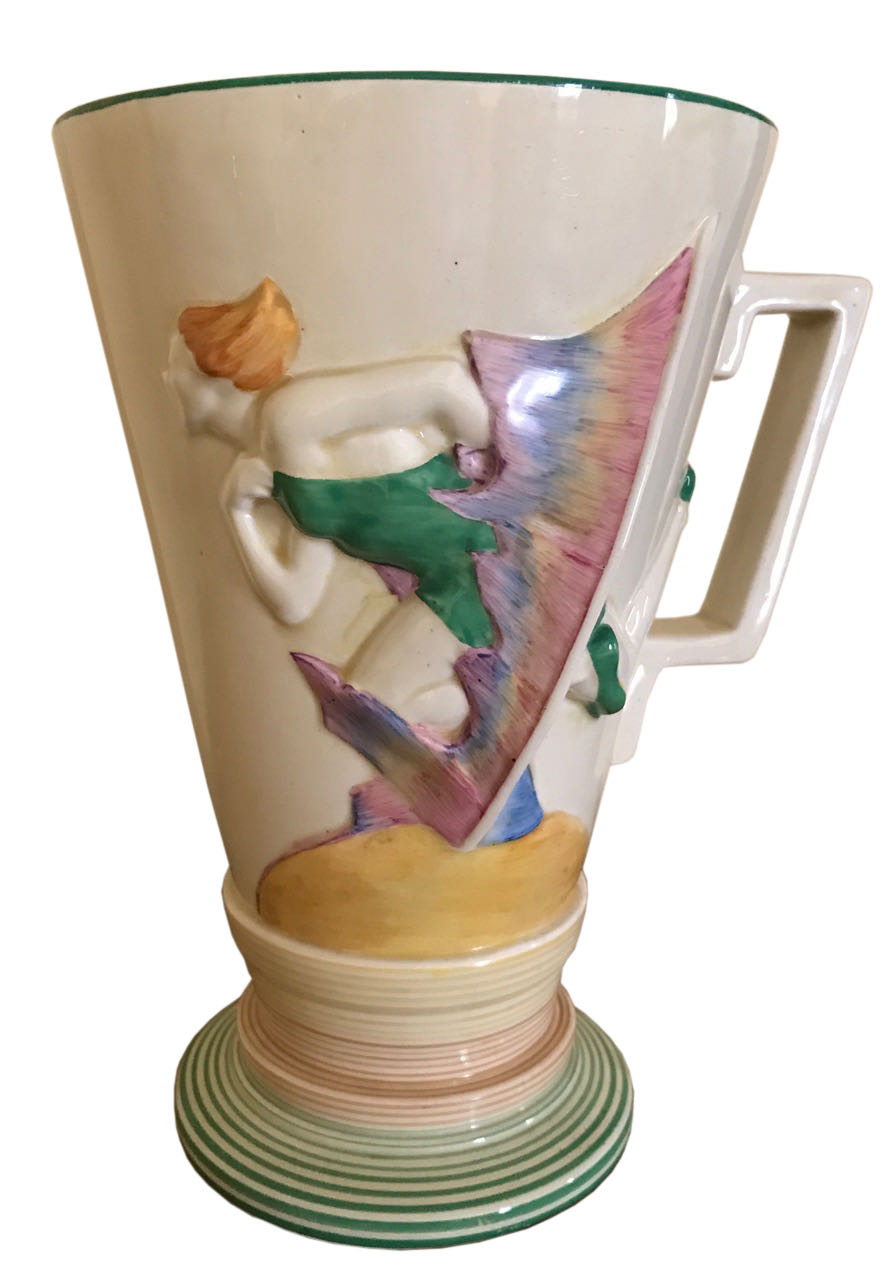 An Art Deco masterpiece from Clarice Cliff, famous for her line of Bizarre Ware Ceramics that introduced modernist, cubist, playful and bold themes into the consevative world of British ceramics and tableware. This dates from the  period of 1930 when modeled forms were introduced with these highlhy  unusual shapes.

This piece is properly called an “ewer” or water vessel, but vase, jug or oversized mug describes it equally as well.  What is harder to describe is the wildly inventive image… a circus performer jumping through hoops, the three dimensional rendering with its moulded relief work really underscoring that “leap”.

Clarice  Cliff had to have jumped through many hoops herself to become the most celebrated designer of Art Deco ceramics ! She was born in England in 1899 and began working in pottery at the age of 13, first painting the simple bands of gold on china plates. In 1916 she moved to the  company  of A.J.Wilkenson of Newport, Burslem to work with gilding, patterning and hand painting. Her work was brought to the attention of one of the partners, Colley Shorter, who gave her the opportunity to do some fanciful painting on product that had minor flaws…so the bold designs and colors concealed those imperfections on the plain white china. Her abstract, geometric and brightly hued pieces enjoyed such popularity..that although they were “bizarre” they were proudly named Bizarre Ware and signed with her name. Eventually, she created hundreds and hundreds of objects, shapes and color ways and enjoyed international success. She was named Artistic Director and had a team of girls that hand painted her designs…at the high point nearly 70 painters worked to decorate her creations. Massive publicity efforts , including celebrity endorsements, color brochures , magazines, news articles and in-store painting demonstrations  by Clarice as well as her “Bizarre Girls” made the work famous around the world. The steady stream of new designs, shapes and products made her work “collectible” even as it was produced.

The “ewer” we are proud to offer was found in Argentina. One of the major outlets for Clarice Cliff Bizarre Ware was Harrod’s Department store of London  which  also imported the ceramics from England to their Harrod’s Store on Calle Florida, Buenos Aires in the 1920s and 30s.

Today, major museums have examples of her work and high prices can be achieved at auction. Some of the most popular and widely produced pieces such as those with the “crocus” pattern are common enough to occasionally find, but there are examples of Clarice Cliff’s work that have sold for $20,000 to $50,000 !