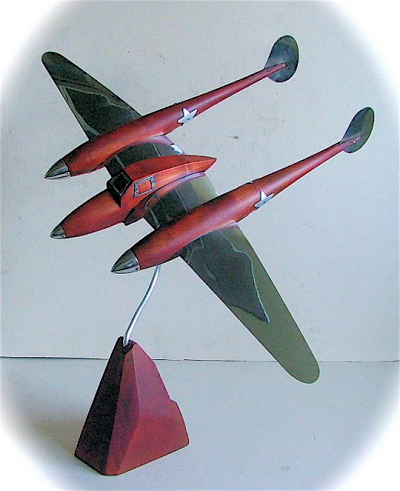 Here’s both a gorgeous work of art and an important historical reminder. This considerably large sculpture (a full 24″ wingspan) is made from solid Rosewood and chrome plated brass. The airplane pivots on an aluminum rod and as such the positioning is infinitely variable. This stunning and thought-inducing piece looks truly fantastic from every angle and is in perfect condition. It is certainly rare to find a USAF WWII Fighter-Plane sculpture and even more rare to find such a beautifully artistic example.

The Lightning designed by Lockheed engineer Clarence “Kelly” Johnson and his team of designers, represented one of the most radical departures from tradition in American fighter development. The Lightning was a complete break-away from conventional airframe design, power, and at long last, armament. Not only did it have twice the power and almost twice the size of its predecessors, but with no less than four .50 cal. machine guns plus a 20 mm cannon, the P-38 had enough firepower to sink a ship–and sometimes did. Concentrated in the central fuselage pod, the guns fired parallel which eliminated a need for a propeller synchronizer.
The Lightning tricycle landing gear and twin-boom configuration completed the list of major deviations from what might he considered conventional Army fighters. In this respect, it was very unusual that the Lightning design progressed beyond the testing stage; such radical concepts seldom achieved production status. But the simple fact was that the P-38 design worked and the Army seemed to have found its dream plane in this 400 mph fighter.
The P-38 was the only American fighter aircraft in active production throughout the duration of American involvement in the war, from Pearl Harbor to VJ Day.